A Note from our Director – November/December 2016

Our Christmas open house on December 4th is not that far off. Where did this year go? The end of the year is often a time for reflection. This past year we hosted roughly 900 4th graders, 12 scout groups including an Eagle Scout project, and another two-dozen senior and special needs group visitors. We started off the year hosting the Smithsonian traveling exhibit, “The Way We Worked.” The museum also hosted multiple engaging programs which put
Native American history in the spotlight. These included everything from Native American artists to lecture programs on the Omaha Tribe, the Great Sioux War, and Native American Women in WWII. 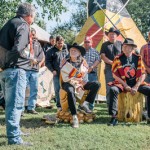 For those who have been able to visit the museum, you may have also noticed there is new and improved sidewalk in the front of the museum and it connects around to the train caboose. I’m also thankful for the little things. There are those who share their quilt or quilts to help make the annual quilt exhibit such a high quality event. As well as the many who helped to make the museum fundraiser dinner and the garage sale a success. I’m fortunate that we have the dedicated museum members, volunteers, and board of directors as well as the County and community support that all contributes to the success of the Sarpy County Museum. 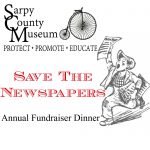 As we wind down 2016, it’s easy to see that we’ve come a long way since that first meeting in 1934. I look forward to what we have in store for next year, including our continued efforts to preserve the Sarpy County newspapers and of focus on Sarpy County in World War One.

See you at the museum,
Ben Justman
Executive Director