Located a few miles south of Papillion off 63rd Street is the Zwiebel farmstead, which is still owned privately by members of the Zwiebel family for the last 150 years. It has a pleasant farmhouse, a considerably large barn, and several other outbuildings associated with the homestead. The limestone house was built in 1867 followed by the barn, also of limestone, in 1871. 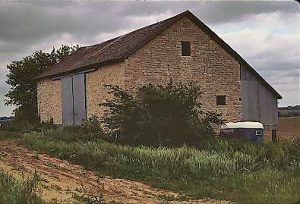 The farmstead is an excellent example of a mid-late 19th century farmstead that was established in this part of the country. The difference between this farmstead and others like it in Nebraska is that the buildings were constructed entirely of limestone. In 1867, it was difficult to find anyone in the state who was experienced in building with stone, let alone enough for four buildings. Sitting near the Platte River, the Zwiebel farmstead was exceptional in that it had a supply of native Nebraskan limestone readily accessible and the means to make use of it.
This farmstead is a great local historical example of an early settlement farmstead in Nebraska. Inside the farmhouse porch, the original wide doorway is covered by a large limestone lintel on which is carved the date “1867.” Unfin-ished beams are all that remain of the barn, but the flooring is gone. 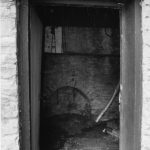 The small rectangular smokehouse is made of limestone, the building age is unknown. A chimney is located at the rear of the building. Hooks are suspended inside from rafters previously used to hang cuts of beef and bacon for smoking.

The Nebraska State Historical Society submitted the Zwiebel farmstead for historical recognition in 2000.