The Fontenelle Bank stands at the corner Mission Avenue and Main Street in Olde Towne Bellevue. Built in 1857, this building has quite the interesting history. The original purpose for the building, as the name suggests, was for it to serve as a bank. The actual bank opened in 1856 and construction of the brick building started in 1857. When the Panic of 1857 struck, banks across the nation failed, including the Fontenelle Bank. The bank may have also engaged in the practice known as “wildcatting 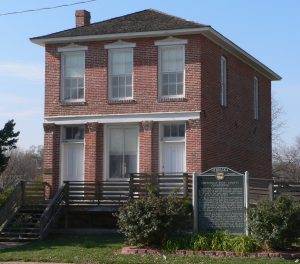 .” In other words, the bank did not have enough of a gold reserve to back all of the notes it issued, when the bank failed many people lost their money. 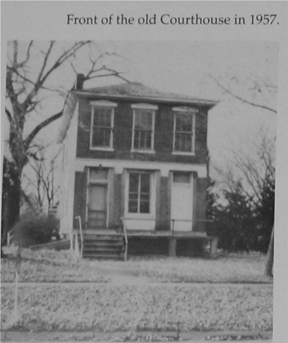 After its short tenure as a bank, the Fontenelle Bank was used as the Sarpy County courthouse until 1875 when Papillion became the new county seat. The City of Bellevue rented the building for the next several decades, finally purchasing the building in 1925. Over the years, the building was used as a city hall and for city functions. The second floor hosted a courtroom, classroom, dancehall, library, and even a medical center. It’s seen its fair share of violence including murders, hangings, and the ferocity of the 1908 tornado in which the roof was torn off.

In 1959, the City of Bellevue looked into restoring the building but restoration was deemed too expensive. The city constructed a new city hall in 1959 and if the building would remain standing at all came into question. A local preservationist, Mrs. LeMar, purchased the building, thereby saving it. She rented the building to various business owners including antique dealers.  In the early 1970s, Mrs. LeMar sold the building back to the city. The bank has since been restored.

The Fontenelle Bank is considered the oldest commercial public building in the state of Nebraska and as such has been placed up on the National Register of Historic Places in 1969 by the Nebraska Historical Society. The original walk-in vault and other historical artifacts are located inside and available to tour by contacting the museum.