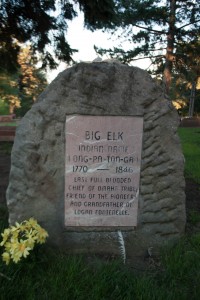 The grave marker of Chief Big Elk at the Bellevue Cemetery,

Chief Big Elk, or Ong-pa-ton-ga, is one of the most iconic figures in Sarpy County history. This week marks sixty years since he was buried…for the third time. His original resting place was on Elk Hill in Bellevue.  When Bellevue College was built, his remains were dug up during construction and reburied in front of one of the buildings. The Sarpy County Historical Society organized an effort to have his remains moved to a safer after the college was demolished and plans for a housing development made. The Omaha Tribe and Reverend John Linsley presided over the ceremony with hundreds in attendance.

The chief was greatly admired by fellow Native Americans and whites alike. He had a reputation as a peaceful man, strong leader, and excellent orator. During the War of 1812 he aligned with the United States against the British, he visited Fort Atkinson located north of present day Omaha several times, and traveled twice to Washington D.C. to negotiate peace treaties.  He worked for peace but he was not afraid to express his opinions. Big Elk was known to have criticized the commander of Fort Atkinson for the arming of the Pawnee, who were arguably one of the most aggressive tribes. The Pawnee frequently went on the offensive against whites and other tribes including the Omaha Indians.  At other times, Chief Big Elk spoke in a rather prophetic manner. The following is an excerpt from his most famous speeches:

“My chiefs, braves, and young men, I have just returned from a visit to a far-off country toward the rising sun, and have seen many strange things. I bring to you news which it saddens my heart to think of. There is a coming flood which will soon reach us, and I advise you to prepare for it. Soon the animals which Wakon’da has given us for sustenance will disappear beneath this flood to return no more, and it will be very hard for you. Look at me; you see I am advanced in age; I am near the grave. I can no longer think for you and lead you as in my younger days. You must think for yourselves what will be best for your welfare. I tell you this that you may be prepared for the coming change. You may not know my meaning. Many of you are old, as I am, and by the time the change comes we may be lying peacefully in our graves; but these young men will remain to suffer. Speak kindly to one another; do what you can to help each other, even in the troubles with the coming tide. Now, my people, this is all I have to say. Bear these words in mind, and when the time comes think of what I have said.”

The trickle of westward migration that began during his lifetime become a flood with the passing of the Kansas-Nebraska Act of 1854 just six years after his death. No, our math is not wrong on that. The headstone of Chief Big Elk bears the date of 1846 as the year of his death but a recent discovery places the date of death as September 16, 1848.[1] The year 1846 largely is based upon the work of Henry Fontenelle’s “History of the Omaha Indians.” Historian John Ludwickson uncovered the publication of the diary of Presbyterian missionary Edmund McKinney, who presided over Big Elk’s funeral.  In this diary, McKinney discusses the condition the chief was in when he arrived at the mission. McKinney sent Big Elk some medicine, for which the chief was very grateful. On September 16, 1848, McKinney wrote “This afternoon, our old and venerable chief, Onpatonga, or the Big Elk, departed this life.” Another important point Ludwickson makes in the article is that McKinney made a distinction between Chief Big Elk and his son who is also seen referred to as Big Elk in some records. This distinction adds further credence to Ludwickson’s claim that Chief Big Elk did in fact die in 1848 by clarifying that it was not a case of the son being mistaken for the father.

Those who wish to pay their respects to the Chief will find signs pointing the way at the Bellevue Cemetery. His grave is located at the top of the hill, alongside the road, and overlooks the famous view from which Bellevue received its name.