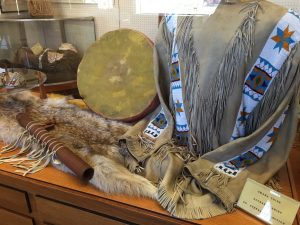 Join the Sarpy County Museum on Sunday, August 28th at 2 p.m. as we hear from Native American speaker, Wynema Morris. This free event, held at the Sarpy County Museum, is open to the public. As a former executive tribal administrator and vice chairman of the Omaha tribal government, she is an active speaker and teacher regarding traditional, historical and political issues of American Indians.

Wynema Morris is a member of the Omaha Tribe of Nebraska and resides on the Omaha Reservation in Walthill, Nebraska. She has taught at the college level for the past 15 years, currently at Nebraska Indian Community College. Her areas of expertise in Native American Studies focus on Omaha Tribal History, Omaha Tribal Culture & Tradition, NA Philosophy, US-American Indian Relations and Tribal Government.

She is an associate fellow for the Center for Great Plains Studies at UNL, serves as a cultural consultant to the Minnesota Humanities Center, and to the University of Iowa – Office of State Archaeologist. She has been a Fellow since 1987 and received the Outstanding Native American Award from the Nebraska Status of Women in 1988. Morris received both her BS and her MA from the Northern Arizona University at Flagstaff, Ariz., where she grew up on the Navajo Reservation.