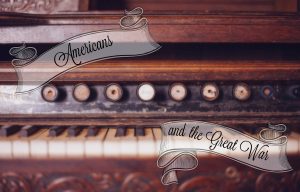 Join the Sarpy County Museum on Sunday, March 26th at 2 PM as they feature Americans and the Great War presented by local historian, David Wells. The role of America in “the war to end all wars” is misunderstood. Most people think only of the 1917-18 period when U.S. soldiers marched off to save the world, not realizing that from 1914-17 the nation was opposed to the war.

Songs of the period show the changing attitude of the American public, from neutrality to anti-war sentiments to entry in the war and the ultimate defeat of Germany. World War II and the Cold War make more sense when you understand what happened between 1914-18. Wells features a special section of patriotic songs written by Nebraskans from Chadron to Omaha. A 45-minute slide program and a large display of sheet music are included.

David Wells is married with 2 grown children and a retired business owner. He is currently the historian at the Civil War Veterans Museum in Nebraska City.