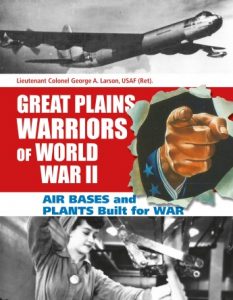 Great Plains Warriors of World War II – Air Bases and Plants Built for War by Lt. Col George Larson, USAF (Ret) is a newly released book published by Shiffer publishing. Until now, Army Air Force Bases in Nebraska during World War II had never before been presented in a single book (most of the photographed structures are no longer visible). These stories and photographs mostly focus on America’s Greatest Generation, which fought and won World War II. Also included are information on and images of the Martin B-26/Martin-Boeing B-29 Superfortress production plant at Fort Crook. Also learn about German and Italian Prisoner of War camps, where POWs contributed to agricultural production in Nebraska, helping feed American troops, Allied troops, and civilian populations around the world.

Larson graduated from Iowa State University, with a BS in History and a commission as a Second Lieutenant, United States Air Force, in May 1969. He earned a Master of Arts degree in History from the University of Stanislaus in June 1978. He served as a strategic intelligence officer with the Strategic Air Command and the Joint Strategic Target Planning Staff, Defense Intelligence Agency, Pacific Air Forces, with an assignment with Republic of South Korea Air Force, Alternate National Military Command Center, Joint Chiefs of Staff at the Pentagon. He was Commandant of Cadets with Air Training Command’s Air Force Reserve Officer Training Corps at the University of Iowa in Iowa City, Iowa. He has written four books and over 300 magazine articles on military history, aviation, naval, and general history.

Larson will be signing copies of his new book at the Sarpy County Museum at 2402 Clay Street in Bellevue, Nebraska on Thursday, July 7th from 11 a.m. to 3 p.m. His book will be available for purchase at this event. For more information email museum@sarpymuseum.org or call (402) 292-1880.