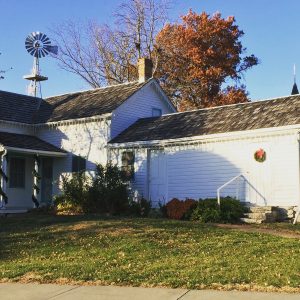 The John Sautter Farmhouse was home to German immigrant farmer John Sautter, Sr. a native of Wurttemberg, Germany. Sautter operated a grist mill for a number of years, farmed over 800 acres of land and served as one of the founders of the First Lutheran Church of Papillion. Sautter also donated land to the Lutheran Church to start what is now known as Papillion Cemetery.

This T-shaped wood framed German structure was occupied from the 1860’s until 1916. The Sautter House stood originally on a farm located just north of the present city limits of Papillion.

In the 1970’s, housing developers bought the original farm land and the house was purchased by the Papillion Area Historical Society in 1979, which moved it to its current city park location. The farmhouse was faced west to be situated the same as it was originally. The Papillion Area Historical Society submitted the building for addition to the National Register in 1980 and continues to care for the farmhouse today.