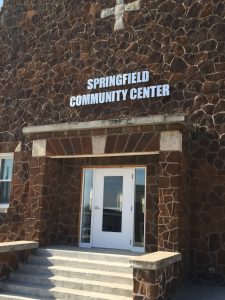 The Community Building was built in the late 1930’s by a Works Progress Administration labor project. The WPA was a national relief program established during the Great Depression. The large rough-cut sandstone building is considered an excellent example of a public building constructed with WPA funds, labor and quality of craftsmanship. Typical of WPA construction projects, the sandstone used for the building, retaining wall, and light post was obtained from a nearby quarry. Keystones are repeated in a cross shape above the main entrance along with being featured above the windows.

Since its completion in 1940, the Springfield Community Building has served a variety of public functions. For many years the basement was used for receptions, local elections and County Fair exhibits. From 1940-1960 the gymnasium was the town’s primary court for basketball games and the stage was used for high school graduation ceremonies. 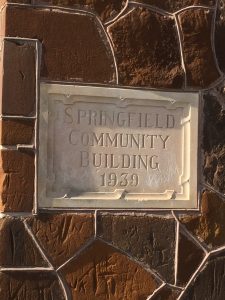 In 1998, the community hall was placed on the National Historic Register thanks to the Nebraska State Historical Society. 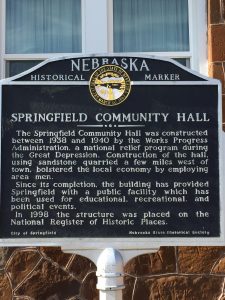