Two Native American sites are located in the western portion of Sarpy County and are listed on the National Register of Historic Places. The first of these sites, the Patterson Archaeological site, is located south of Interstate I-80 along Highway 31. This site was home to a group of people known as the “Central Plains” people between 1000 A.D. and 1400 A.D., several centuries before the arrival of those whose names we more readily recognize today such as the Pawnee. The Central Plains people lived in a very different manner from the more nomadic later arrivals. Remnants of houses, trash piles, pottery pieces, and tools were found at the Patterson site. The Nebraska State Historical Society put together a great publication about this site, which you can download for free at: http://www.nebraskahistory.org/archeo/pubs/lowerplattevalley2.pdf.

The second site located in western Sarpy County is the Champe-Fremont 1 Archaeological site. It is located on a private farm near Gretna. This site dates backs to about 1300-1400 A.D. Several lodges, possible burial mounds, and a lodge that appears to possibly have been used as a “charnal house” have been located on this property. For those who are unfamiliar with this term, a charnal house is where the bodies of those who are deceased are placed.

On the eastern fringe of Papillion near 48th Street, between Highway 370 and Cornhusker Road is the Kurz Village site. It is also listed on the National Register of Historic Places. This site was inhabited at one point by a prehistoric group and at a much later date by the Omaha Indians. The Omaha Indians resided here from 1847 to 1856. It was the last place they lived before relocating to the reservation. It is believed the village site was spread out over about sixty acres. In the 1980s the Kurz Village garnered a great deal of media attention as a gentleman whose land contained part of the village site took it upon himself to organize a volunteer led dig. He organized the dig because he feared the encroachment of development would destroy remnants of the village and did not believe state organizations gave the site the credit it was due. During the same year, the Omaha Indians looked at purchasing this land with the hopes of building a museum. 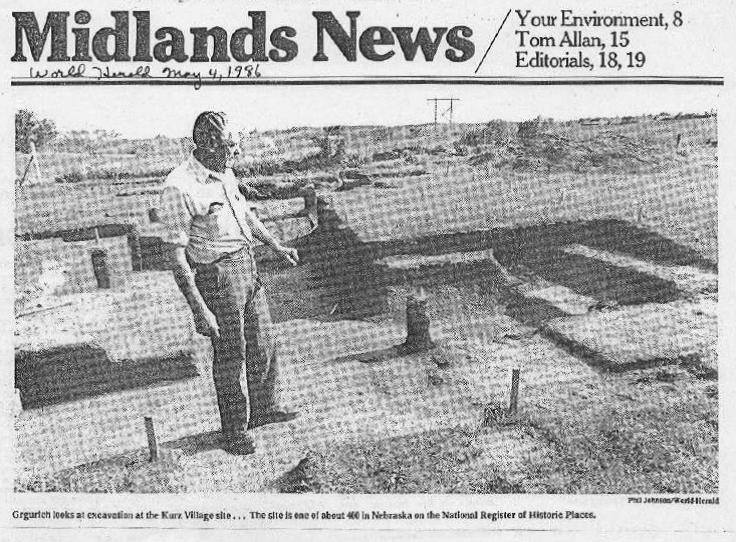