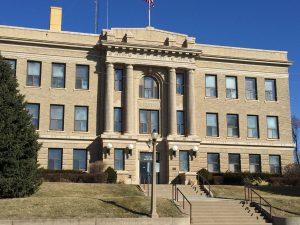 When the county seat was in Bellevue, a former bank building was used for the courthouse, and it is listed on the National Register. Following the change to Papillion, a rather modest brick courthouse was constructed. By 1921 it was deteriorating and was deemed inadequate. A campaign was started to secure a replacement. The campaign for this building was not without controversy. Papillion residents attempted to move the site to the south side of town, and Richfield citizens tried to relocate the county seat to their community. In the 1970’s the county again outgrew its courthouse and in 1974 moved to a large new facility at the edge of Papillion.
The building now serves as Papillion City Hall and features an art gallery on the 2nd floor.