The Fort Crook blacksmith shop was the first building completed at Fort Crook in 1893 and still remains part of Offutt AFB today. The structure was used not only by blacksmiths, but also by a variety of other tradesmen such as tinsmiths, plumbers, painters and carpenters. Since then the building has served as a railroad weight station, sheet metal shop, and library among other uses. The four service bay doors originally were tall enough and wide enough to permit entry and exit of animals, but the doors have been closed or reduced to standard size personnel doors with wood framing. 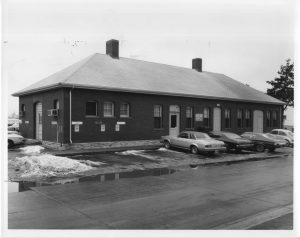 The blacksmith shop was submitted for approval as a national historical landmark in 1976 by the Civil Engineering Squadron at Offutt AFB and approved a few months later in October . This building was identified as being historical significant for its architecture, excellent craftsmanship, and its role in support of military operations. 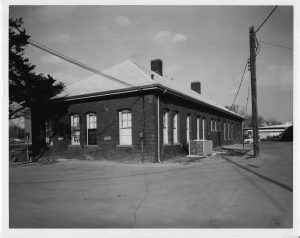 For more on this building or the history of Offutt AFB, visit the museum and pick up your copy of Offutt Air Force Base (Visions of America) written by Ben Justman, Sarpy County Museum Executive Director, at the museum giftshop.