Welded bridge construction first appeared in the United States in the late 1920s, this steel truss bridge is estimated to have been built between the 1930’s and 1940’s. It is unknown who actually built the bridge but it is suspected the county built it themselves. The Big Papillion Creek Bridge is technologically significant as one of Nebraska’s earliest examples of welded bridge construction. The specific welded/bolted tied arch design of the bridge is also the only one of it’s type to be identified in Nebraska’s statewide bridge inventory. It is believed to be welded in local shops, brought to the site in sections and then bolted together onsite. 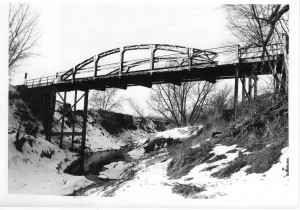 The bridge is located on 120th street about 3 miles west of La Vista and spans over the south branch of Big Papillion Creek. The Nebraska State Historical Society submitted this for historic designation in 1992.