Private Rollin Lee Alley is this month’s featured World War II veteran. Rollin was born on March 10, 1926 to Chester and Faye (Winter) Alley on a farm outside of Gretna.  He had four siblings: Glen, Emma, Marie, and Doris. Sometime before 1940, the Alley family moved to near Springfield where Chester worked as a mechanic and Rollin attended Springfield High School.

Not long after graduating high school, on May 14, 1944 Rollin married Helen Frances Adair, daughter of Frank Adair and Ida Archer. Not six weeks later, he joined the military. After receiving his training at the Marine Training Base in San Diego, he was stationed at Camp Pendleton.  Then Private Alley was sent to serve in the Southwest Pacific as a part of the 2nd Battalion of the 1st Marine Division.

Private Alley was one of 80,000 soldiers that landed on the island of Okinawa on April 1, 1945. This was the last campaign of the war for the 1st Marine Division. This division fought alongside of the 6th Marine Division and the Army’s Infantry 27th Division. The fight dragged onto until June 21, 1945. More than 1,600 soldiers were killed during the fighting on Okinawa. Private Alley was one of them.

It took approximately two weeks for word of his death to reach his parents and his young wife. A memorial service was held in early May. A few months later, just three days after V-J day, Rollin’s son was born.  A gravestone bearing Rollin’s name can be found at the Springfield Cemetery just north of the town of Springfield. 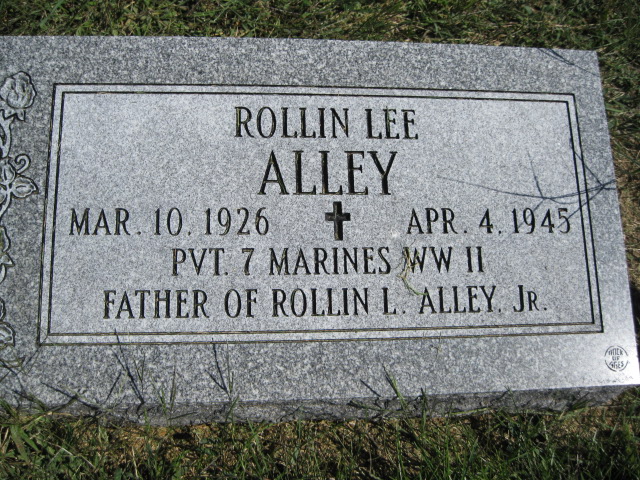 Rollin’s story is all too familiar. A young man sent off to war before he turned 21. Rollin was one of more than 1,000 Sarpy County residents that fought in World War II and one of more than 400,000 soldiers from the United States to die during the war. Worldwide it is estimated more than 15 million soldiers were killed with more than 45 million civilian losses.  The numbers are staggering and historians believe that they, even at this unfathomable height, may be greatly underestimated. The sheer magnitude of the number of those who lost their lives does not diminish the importance of a single life, like that of Private Rollin Alley. As we wind down our tribute to all of those who served in World War II or supported those who served in World War II, we ask for your help in helping remember the stories of every soldier who served.  If you have a picture or story of World War II veteran who was from Sarpy County, we would greatly appreciate you sharing it with us.