Robert Gael Strawn was born on October 31, 1921, in Papillion, Nebraska to Joseph and Ruth (West) Strawn. His father was an Indiana native and World War I veteran. Joseph worked as an abstractor, then for a time as the Sarpy County clerk before he became a lawyer. Robert’s mother Ruth, was also an Indiana native of Irish decent. For the majority of Robert’s childhood, he was essentially an only child. The Strawn household was not an empty one, however, his maternal grandparents- Charles & Ruth West- lived with them. It was not until Robert was about eleven that his brother, Jerry, joined the household.

In 1939, Robert graduated from Papillion High School and went on attend college. In July of 1942, he entered the service. Upon the completion of training at Fort Sumner, New Mexico Strawn was commissioned as a Second Lieutenant in the Army Air Corps. A month later, in July 1944, he married Jeanette Muir at the Las Vegas Army Air Field Base Chapel in Las Vegas, Nevada. 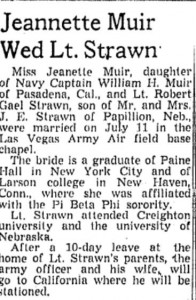 Strawn received his pre-combat training in England. During the war, he was a co-pilot of a B-17, the “Flying Fortress,” in the 493rd bomb group. In 1945, this group was commanded by Colonel Robert Landry as it dropped bombs over Germany. Strawn received two Oak Leaf Cluster medals in addition to his Air medal for his “meritorious achievement during Eighth Air Force bombing attacks on Nazi military and industrial targets.”

After World War II came to an end, Robert stayed in the service. He eventually reached the rank of Lt. Colonel in the Air Force. He died April 6, 1995, and is buried at Fort Bliss National Cemetery in El Paso, Texas.